In this study, fifty driven piles located in the Santos Coastal Plain (“Baixada Santista”), Brazil, have been dynamically tested at various times after installation, indicating gain of capacity over time. The average side shear resistance, related to a low-OCR clayey layer – known as SFL soil, was evaluated over time, indicating side shear set-up within a relatively narrow range of values (between 2.0 and 2.5) approximately 20 days after installation. The cavity expansion theory, which considers an ideal cohesive soil, has been used to predict the effective radial stress over time, considering two main parameters: undrained shear strength and horizontal coefficient of consolidation. Finally, the average of measured pile shaft capacities were compared to the unit shear resistances predicted by the β Method (effective stress method). The theoretical values of side shear set-up are fairly similar to the results of the analyzed load tests, which seems to support the viability of the presented method. 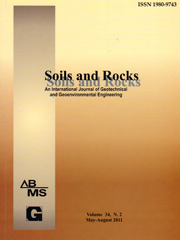